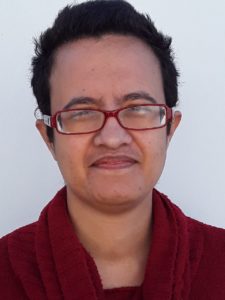 Noeleen Wiener is 34 years of age.  Noeleen has an intellectual disability.  She joined Orion’s Art Program 2 years ago never having been in a structured art program before.  Noeleen took some time to settle and to find her direction but with the guidance of the program supervisor Noeleen started painting on canvas during 2020.  She is now producing some beautiful modern colourful simplistic pieces.

He started his career in 2001 at Hout Bay Gallery where 25 works sold in 6 weeks. To date Scott has produced over 5000 artworks with 3500 painting sales, 1000 in print sales and 2500 sketches. Scott’s work has appeared on the auction circuit with 42 catalogued auction sales

. Scott works prolifically with in acrylic on canvas, print, sketch and sculpture. Scott also works in ceramic and spray paint.

Scott has had 109 global exhibitions (29 of them solo) in South Africa, United Kingdom, Germany, The Netherlands, Belgium, Italy, Switzerland and the United States.

Scott has partnered with lifestyle brands to produce a range of art and product. The most prolific is Vespa. Sagaform, Absa Cape Epic, Woodstock Brewery, Lomond wine farm and Rolling Woods Surfboards.

Scott has worked with The Desmond and Leah Tutu Foundation and the Arch himself on a body of work entitled Black White Red Yellow.

Scott donates over 30 works a year to Charitable Organizations to help them raise funds for their cause. More importantly Scott immerses himself in on Charity each year to expose them to the art world, have fun and generate funds, for their cause, in the process. Scott has worked with Songo, Chaeli Mycroft, MAD Leadership Foundation, Orion Organization, Kids Rights and Mellon Educate.